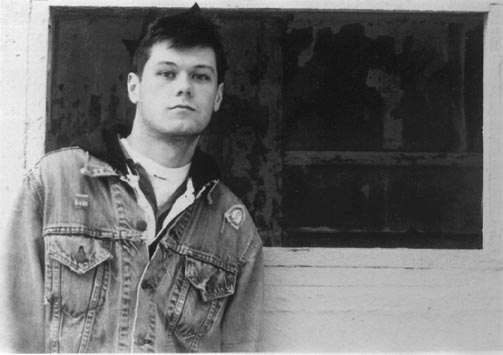 Twenty-one years ago, in 1992, my close friend Devron Wondercheck wrote me this letter on Gay Pride Day. He was 26 years old, and I was 28. We saw each other just about every day. He was sick with AIDS, though he hung on until the following autumn. I wanted to remember him today, along with all my friends who did not survive the epidemic — even though it is not over, really. And I want to remember something of that lost time, seemingly so long ago yet never far from my heart. Here’s what Devron wrote in longhand to me, self-pity and spelling errors and all, on Gay Pride Day 1992…

Twenty-one years ago, in 1992, my close friend Devron Wondercheck wrote me this letter on Gay Pride Day. He was 26 years old, and I was 28. We saw each other just about every day. He was sick with AIDS, though he hung on until the following autumn. I wanted to remember him today, along with all my friends who did not survive the epidemic — even though it is not over, really. And I want to remember something of that lost time, seemingly so long ago yet never far from my heart. Here’s what Devron wrote in longhand to me, self-pity and spelling errors and all, on Gay Pride Day 1992…

You have asked me to write for a few weeks now, and today I need to express. It’s Gay Pride. I’m not there. Because something inside is causing me to almost pass out when I stand. My body is full of pain and weakness. I want to be there, to feel the unity and strength of so many people like me. I’m overwhelmed with this urge to cry. But I can’t cross that last line and allow the feelings to escape. I hate this. This slow, painfull, dying. The loss of everything. I have no sense of pride or self-worth anymore. My thoughts are of what am I going to eat tomorrow & how will I pay for it. I can’t allow myself the joy of planning ahead. I can’t become excited for an upcoming event. Instead I pray and hope that I can make it throught w/out getting too sick.

People need hope or responsibility. I have neither. Why get out of bed in the A.M. when all I have to look forward to is making something to eat & popping a bunch of pills. There is no light at the end of the tunnel for me, I can only expect things to get worse. I could relate to that movie [The Living End] in many ways. Yet it was based on sex, and sexual energy. I desire to let go & live dangerously. And to kill. My anger is so strong now. I often think of cutting people to shreds. Or blowing the heads off of people. I can’t relate to the sex and dying aspect as I’ve lost so much of my sexual being. I desire to be with someone, but more for companionship than anything else. We’ve talked of this, and I know you don’t understand. But my entire life has been so incredibly lonely. I have never felt safe enough to open myself to people. When I do, and then get hurt (as we all do) I overreact and close up even more. Now it takes all of my energy and strength to maintain my life, I just have nothing left for anything else. I dream so often of someone just holding me and I always wake up crying with the deepest feeling of nothing, and pain, and desire. Your friendship means so much to me. I hardly ever express how I feel. Sometimes when you touch me in a simple gesture of friendship, and love, I almost crumble. I’m so afraid to acknowledge it and return the love. I’m so confused, I just want to be comfortable and safe, and I want to live. But that fighting spirit is getting weaker & weaker. I don’t want to think I can give up or sacrifice much more, I’m so far from who I am and who I want to be.

So on this day of gay pride, in a community focussed on sex, beauty, money, and prestige, I stay home alone. Yet this is my community. The only one I know. So where is my home? Who are my family? The thought of death does seem so nice to finally be free, to know all and need nothing. It seems so ridiculous: here today, gone tomorrow. You cry a little, rearrange things a little, and carry on. I’m spent for this day. I almost wrote that I was sorry for being so down. But I’m not, this is my life, and this is how I feel today.

I would later get a letter from another friend of Devron’s, Joe Logan. On June 28, 2013 Joe wrote me this lovely letter:

I met Devron in 1989. I was 18 at the time and volunteering at an AIDS conference in Boulder Colorado. I wasn’t “out” when I started the conference, but that weekend was a catalyst for me ­ I was enamored of Devron. True I hardly knew him, but it was that intense kind of heart-throbbing desire that you can get when you are 18. (I’ve had it a couple times since, but it was never of the same). Devron and I were in a small support group that met everyday, where people could discuss their feelings about the events of the day. I remember listening to him talking, not believing that he could be gay — and he was so beautiful. Anyway, we never really got to know each other, but the next week I sent him a letter telling him that I was gay and that meeting him had helped me to not feel ashamed and for the first time to acually feel excited about what lay ahead of me. He wrote me back a beautiful letter. I still have it with a picture of him that my girlfriend took at the conference. The letter was as articulate and beautifully written, and I also think there was a sad part to it too. Funny- reading over it now I’m a little embarrassed about how big a deal it was for me, but I remember then it was very difficult. I wrote him back several times afterwards but never heard back from him. Two years later, in San Francisco, I ran into him on the street. I stopped and reintroduced myself and we spoke for a moment, and that was the last time I saw him.

My friend from the conference knew his doctor, and some time after that meeting on the street, they told me that he had died. It was a weird kind of mourning, not really knowing the person that died — it felt kind of selfish in a way, because the only thing I really knew to mourn was that feeling that Devron had incited for me four years earlier. I don’t know if this makes sense, but anyway… It is nice to finally be able to reach someone that knew him. I had fantasized for many years of contacting his family and telling them what a nice thing he had done for me.

Here’s the letter Devron wrote to me…

Dear Joseph,I just returned from California and I opened your letter. I’ve been thinking about how I should answer and what I should do to help you through this. I finally decided to tell you all the things I wish someone had told me when I was “coming out.”

I guess the first thing to tell you is that you are not alone. The next thing is that you have a right as a living being to everything this earth has to offer. I could spend a lot of time trying to argue with your feelings of being bad or letting your parents down. But how do you argue with emotions and ideas that have been taught to you all your life? You must decide if you are here to make mom and dad happy or be the best person you can. And that means doing what is right for you. How many truly happy and satisfied people do you know? Are they happy because they pleased their parents or because they followed their hearts?

I can’t say what your home situation is like, but for me I believe if a parent truly loves their child they will accept them no matter what. Not to say it hasn¹t taken years for me to develop a wonderful relationship with my family. It has taken years of honesty and pain and fear.

I know its hard to be different and to be something that is not widely accepted. But it is such a great feeling to be yourself and to learn to love yourself. Believe me Joseph, I have spent years hating myself, and I’m finally starting to accept myself. It is amazing how many others will accept you too.
The “bonding” you spoke of can only happen when you are honest with yourself and others. It is so magical, the feeling of love that can be shared with another man.

Finally, Joseph, I want to offer you some advice. First of all you have every right to grow into a relationship with another man. Every right to expect the highest standards from that person and the relationship. There is a tendency to explore the sexual scene when one first enters into this new lifestyle. I think that’s okay, you need to develop yourself fully. I just hope you can remember that a friendship or life-mate is much more meaningful than a quick encounter. And if you decide that this is what you really want for yourself, please be careful. There are a lot of people who are very selfish and they may try to exploit your take advantage of your innocence. Just follow your heart and do what feels right.

My god Joseph, there is so much I want to share with you. I hope you can gain some insight into this decision from this letter. I want you to know that your secret will not be passed on until you allow it or decide not to allow it.

If you need to talk to me feel free to call me or write me if it is too hard to talk about it. I hope to hear from you soon. Take care Joseph.